I’m envisioning this awkward moment in the studio where Florida Georgia Line’s Tyler Hubbard (long-haired one) and Brian Kelley (Bevis-looking one) walk into the recording booth to sing their part of the new rendition of “Friends in Low Places,” and Garth’s in the control room in his black hoodie, baseball cap, and goatee, all giddy, but then gets a confused look on his face. “Why is only the long-haired one singing?” he asks, causing Florida Georgia Line’s producer Joey Moi, the former producer for Nickelback, to get a pained look as he realizes Garth has no idea who in the hell Florida Georgia Line is.

Super secret sources are telling Billboard that Garth Brooks will be issuing an updated version of his 1990 mega hit “Friends in Low Places” to mark the song’s 25th Anniversary, and he will be enlisting a number of high-profile low friends to help him with the new rendition. Included on the new track are reportedly George Strait (yep), Keith Urban (err), Jason Aldean (nope), and Florida Georgia Line (puke). Even more super secret sources tell Saving Country Music that Sam Hunt was also considered for the updated version, but when quizzed, the only Garth that Sam could name was Dana Carvey’s character from Wayne’s World. 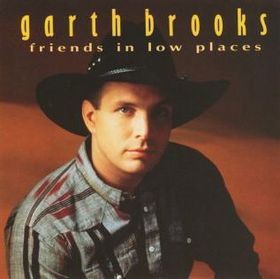 “Friends in Low Places” was originally released as a single on August 6th, 1990. It was written by Dewayne Blackwell and Earl Bud Lee. Garth first sang the song in a demo session, and loved it so much he asked the songwriters to put it on hold for him for his next album. The idea for the song came when the songwriters were supping at the Tavern on the Row in Nashville, and Earl Bud Lee forgot his wallet. “Don’t worry. I have friends in low places. I know the cook,” Lee said, and the line became legendary. A few months later, while celebrating another #1 hit, Blackwell and Lee decided to make the line into a song, writing the song down on napkins because that’s all that was available before Skype sessions in cubicle farms gave rise to the inspired songs of country music today.

“Friends in Low Places” went on to spend four weeks at #1 on the Billboard Country Songs chart, and won both the CMA and ACM awards for Single of the Year in 1990. Mark Chesnutt also recorded a version, but it was released a month after Garth’s, so his rendition got screwed. “Friends in Low Places” is considered Garth’s signature song, unless you reserve that distinction for Chris Gaines’ “Way of the Girl.”

“Friends in Low Places” 2015 will probably be released exclusively through Garth’s weird GhostTunes, which likely means few will labor to hear it. But let’s actually wait to listen before we declare it sucks, mkay?