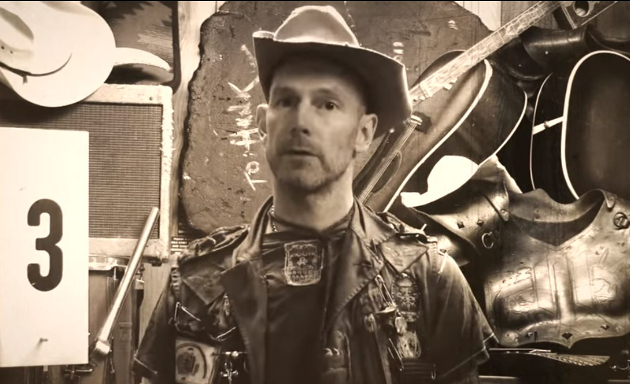 Hank3 has been out of the spotlight for the last few years as he takes an extended period off to reshuffle his personal life, but he has re-emerged recently as part of the heavy metal band DevilDriver’s upcoming tribute to Outlaw country called Outlaws ‘Til The End to be released July 6th. Hank appears on the opening track of the album, which is a rendition of his song “Country Heroes.” And as part of the project, Hank3 has also participated in a behind-the-scenes documentary, which is the first we’ve really seen of the 3rd generation country artist in nearly four years.

“Was there a moment when Outlaw country just struck me as a kid? Not really because the record were already lying around, and I grew up listening to it, and I consider my grandad one of the Outlaw legends or timeless guys,” Hank3 explains in the video (see below). “So since his records were around—and I’m talking when I was four to six-years-old, also had Charlie Daniels, Waylon, Willie, Johnny Paycheck, Merle Haggard, David Allan Coe, on and one and on, Jerry Lee Lewis, all those guys, I was lucky enough to have that in a collection. So hearing those songs I was already I guess used to it.”

Hank3 also talks about being able to meet many of the Outlaw artists at an early age.

“I do remember going out on the road and seeing it officially my first time, and what all happened behind the scenes, and with the crowds, and how things were. I think my first picture being near Willie Nelson I think I was five, maybe six. And then the first time I was ever on stage, I was ten in Atlanta. That was when [Hank] Jr. was touring with Waylon, Lynyrd Skynyrd, and all kinds of others in that market.”

From the country world, John Carter Cash, and Ana Christina (Cash) are also participating in the DevilDriver project, as well as metal and punk luminaries such as Lamb of God’s Randy Blythe, Lee Ving of Fear, Wednesday13, Brock Lindow of 36 Crazyfists, and Burton C. Bell of Fear Factory. Songs covered include “Whiskey River,” “I’m the Only Hell (Mama Ever Raised),” “The Man Comes Around,” “A Thousand Miles From Nowhere,” “Copperhead Road,” and “The Ride.” See full track list here.

Outlaws ‘Til The End is now available for pre-order. It is the first volume in what DevilDriver hopes is multiple releases behind the concept. Hank3’s speaking parts in the video below can be seen at the 3:08 mark, and the 7:13 mark. Lee Ving, Burton C. Bell, Brock Lindow, and others also participate in the video.

READ: Hank Williams III – The Systematic Elimination of Hank3 Will Be Over Soon