Holly Williams Finds Her Voice On “The Highway”

Before this album, I’d been mostly opinion neutral on Holly Williams. Being the granddaughter of Hank Williams, the daughter of Hank Jr., and the sister of Hank3 appointed her music the respect of more than a cursory look. The pedigree runs too deep in that family to handle her otherwise. But Holly only seemed to have only one foot in the music business, unsure if it was the way she wanted to spend her life, though aware that her family’s lineage was probably her quickest way to success.

Her first two albums The Ones We Never Knew in 2004 and Here With Me in 2009, both released on major labels, left one wondering about Holly’s true music identity. Neither were particularly commercially successful–she’s yet to have a single hit the Top 50 threshold–but she really didn’t seem to align with the independent world of music either. She was neither here nor there, and with a lack of scene support her career sort of drifted. The Highway, released on her own Georgiana label, changes all of that. 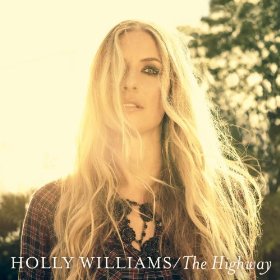 Produced by Holly and Charlie Peacock, and written mostly by Williams herself, The Highway puts Holly Williams smack dab in the middle of this revolutionary crop of young women that threatens to completely shake up the country music world and mindset. Along with Kacey Musgraves, Caitlin Rose, and Ashley Monroe, Holly Williams now has a career-caliber album that exemplifies the leadership and creativity coming from country’s young women.

The Highway takes a more Americana route than a country one, with sparse arrangements and a focus on deep lyricism. The music stays soft while the words are cutting. There’s a few exceptions like the twangy, steel-guitar soaked “Railroads,” but mostly The Highway takes advantage of the emerging commercial viability of Americana by bringing a refined ear to the compositional process and focusing the listener on the art of the song.

There’s still a lot of meat here though for the country music fan. The music might be refined, but the words come from the downtrodden life, with a lot of depression, addiction, and sorrow in the stories. “Drinkin'” is the track that other songwriters will listen to and beat themselves up for not writing. Its unconventional structure reels you in while Holly’s voice strikes that healthy balance of conveying country inflections without felling like a “put-on” act.

The biggest takeaway from The Highway might Be Holly’s voice. Not really known as a notable singer heretofore, Williams embarks on a discovery of her vocal strengths on this album, learning to accentuate the unique aspects of her tone, and even to take her vocal weaknesses and turn them into strengths such as great singers like Emmylou Harris have done in the past. There are a few Emmylou-like moments on this release, with Holly’s earthy tones and strain in her voice emphasizing the emotion of the story. “Gone Away From Me” is where this is exhibited best, while a song like “A Good Man” featuring a trailing vibrato has enough soul to be found on an R&B chart if it weren’t for the fiddle.

About the only hiccup on The Highway may be Holly’s propensity to write in a 3rd-person male voice that sort of confuses the perspective of some of the songs, most notably the anthemic final track, “Waiting on June.” This issue is short lived though, as you understand that when listening to the story it is more honest and true because it is being told from the male perspective instead of Holly attempting to augment the inspiration for the song to fit a female voice.

Where Holly Williams’ career and releases left her neither here nor there before, now she has found her voice, has found her place, and that place is amongst the talented women doing what they can to return the greater country music world to a place of substance.

Preview & Purchase Tracks from The Highway