Trigger Down with Pop Country 189 Comments 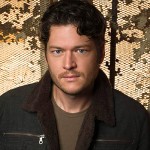 we had moved on from the “new Outlaw” era, to pop country stars trying to be the next Taylor Swift. Well apparently not. Now Miranda Lambert’s hubby Blake Shelton wants in on the fun, releasing a song called “Kiss My Country Ass”, an unapologetic, unveiled attempt at the Music Row “Laundry List” songwriting formula (written by Rhett Atkins apparently), that takes it to another level by rehashing David Allan Coe’s “If That Ain’t Country” and introducing “Outlaw” Blake to the spoon-fed masses.

Gretchen Wilson’s Body Odor has more country boy in it than you do Blake Shelton. I do hope David Allan Coe hunts you down and drives a motorcycle square up your ass. At least the other “New Outlaws” like Eric Church and Josh Thompson have a shred of country cred. All you got is a drummer that looks like he belongs dancing at Chippendales, and a $400 Affliction shirt with sparkly fairy wings on the back.

Marlboro cigarettes and Wrangler jeans? Is this a country song or a fucking commercial? So I have to smoke Marlboro Reds to be country? What does brand loyalty have to do with being country? If you want a cigarette Blake, I got a butt you can suck on.

I hear you mention a “Rebel Flag” but I don’t see one. Is that because the makers of this video identify the stars and bars with hate and not heritage? And then I love this: “Well there’s a whole lot of high class people out there that’s a lookin’ down on me.” Oh fucking please Blake, you have more money than 95% of Americans. You’re trying to manufacture some sense of oppression so you can feel the pride of being identified with a lower social class than you actually are; a selfish, pathetic conceit that is insulting to people that really are kept down in life because of prejudice.

And it gets even better. “Don’t wear no fancy clothes, no ties or three piece suits.” What do you think I’m stupid? I’m watching your video right here, the video for this very song, and your guitar player is wearing a fancy dress vest from a three piece suit, and your drummer is wearing a flaming lipstick-red necktie, looking like he should be a cage dancer for Oingo Boingo.

As for these idiots in the crowd shots of the video, sorry folks, but you can’t claim any country cred from living in a KB Home or Toll Brothers tract house. I actually tried to get in this video, but they told me I didn’t qualify unless my megachurch was big enough to have its own Starbucks. These clueless sheep in this video are seriously pissing me off more than Blake Shelton. Look at these assholes rubbing their backsides together like a bunch of blue-assed baboons. I’ve seen more rhythm in a random orbital sander. And if you’re going to disgrace yourself and country music, stay the hell off the steps of the Ryman, for serious. There’s nothing wrong with being a suburban sissy puppy, until you lie to yourself that you’re not, and engage in this type of subversive escapism-style culture worship.

And as for Blake saying, “If you’re not down with my “Outlaw” crowd…” I love how these “new Outlaws” go all the way up to the line, but don’t have the balls to cross it. Are you saying you’re an Outlaw Blake Shelton, are you? Or not? Actually I used to care about people calling themselves “Outlaws” while completely misunderstanding the term, but now I understand that anyone listening to this song thinks the country music started with Garth Brooks, so the point is moot.

Look Blake Shelton, up to this point I had no excuse to bring your name up. So why cross that line now? Why sell your dignity, alienate your purist fans and rocket up the Saving Country Music shit list? The American rural culture is not for sale so the suburbs can stay satiated, subdued, and consuming. Well actually, yes, yes it is. You song and video is a perfect example of this.

(This rant was written by The Triggerman, who lives his mom’s basement, has no friends, and wants to invite terrorists to American and teach your children about homo sex. He also thinks that all guns should be illegal. His name is ironic, like a hipster’s curly-end mustache. He wrote this rant exclusively because he is jealous of Blake Shelton.)