“Nashville is alcohol-poisoning the minds of our young people.” 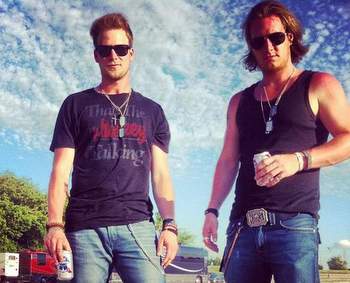 Defendants of the adverse trends corrupting mainstream country music will give you many reasons why the trends aren’t really adverse at all, including that if you don’t like the music, you should simply exercise your right to not listen, and that the music isn’t necessarily affecting behavior so in the end it’s harmless. But part of the problem with popular country music these days is that it is so effusive throughout society. You turn on a college football game or watch a wrestling broadcast, and there Florida Georgia Line is singing the intro or taking you into a commercial break. Country is now the most popular genre of American music, meaning it’s being piped into grocery stores, being played at schools, and is ever-present in cars being driven by moms and dads all across the country as their kids sit in the back seat soaking it all up and singing along to catchy songs with simplistic rhythms and repetitive themes perfect for getting stuck in the heads of youngsters.

Compounding the problem is that just a few short years ago, country was one of the safest places on the radio dial for parents with small kids in the car. Think about the “soccer mom” effect that country music was cultivating in the late oughts, when artists like Taylor Swift, Carrie Underwood, and Rascal Flatts were dominating the country airwaves. Country radio was full of fluffy pop country songs that parents could feel fine, if not proud of playing in front of their kids compared to the filth pervading Top 40 radio at the time.

Now the entire radio field has been reversed, even though parent’s presets may still be on the country station. Country is where the perverse sentiments of popular culture have come to roost, and the endless droning in songs about drinking, drug use, materialism, and misogynistic views towards women are nearly required to get your music at the top of the country charts. It’s been theorized by Saving Country Music that part of the reason for this trend is a backlash from the mid-00’s when the rising sentiment became that country music was becoming woosified. That’s when you had artists like Eric Church, Jason Aldean, and then later Brantley Gilbert and Florida Georgia Line beginning their ascent, purposely focusing on many non family-friendly themes and constantly trying to prove how country they were in their lyrics.

However we got here, country music is now a haven for filth on the radio, easily giving pop and even hip-hop stations a run for their money. And as mom and dad find their own personal preference on the country station, the themes in the music get incessantly pumped into the young skulls riding in booster chairs and holding sippy cups in the back seat. It’s not that drinking themes haven’t always been present in country—you could argue they’re one of the foundations of the genre. It’s more about who they’re being played to and in front of, and how these themes are being portrayed (glamorous instead of cautionary). Even if you choose to avoid the music yourself, you can’t help but worry how it is affecting society as a whole when so many young people are being subjected to this music. 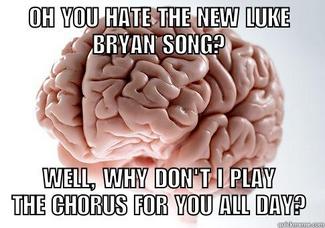 This was illustrated just about perfectly on Friday (11-21) by CBS Evening News reporter Steve Hartman when he took a deeper look into how his two young kids were computing the lyrics of country songs in their developing brains as they sat and listened to popular country music in the family motor carriage.

Steve Hartman’s conclusion? “I’ve got some sobering news — Nashville is alcohol-poisoning the minds of our young people,” he says in his report.

Hartman goes on to illustrate just how deeply popular country’s drinking themes have burrowed into his two son’s brains as they recite titles and lyrics to popular country songs effortlessly. Hartman turns his blame to Kix Brooks, the host of the syndicated American Country Countdown, where apparently the majority of the Hartman kids’ exposure to popular country music comes from as they listen to the weekly show on the way to swimming lessons. So papa Hartman took the kids to Kix Brooks’ studio and asked the man himself what he thought about the trend of drinking songs in country, and Kix initially drew a blank, illustrating the sort of “deer in headlights” moment many parents feel when faced with the reality that what their kids are listening to might affect them adversely in the future.

Reporter Steve Hartman did a good job of explaining how kids listening to popular country songs can be a good teaching opportunity for parents to explain the ideas behind responsible drinking, etc., but it may be a little too much to expect this from most busy parents who listen to popular country song’s party themes as their own form of escapism. And as Hartman says, these lessons were something he was hoping to avoid until “after 1st grade.”

And Steve Hartman can’t be painted as some modern country hater or alarmist. After all, he was voluntarily listening to the American Country Countdown himself, and many in the industry, including Big Machine Label Group CEO Scott Borchetta have seen their own dilemma with so many drinking songs, saying in December of 2013, “Everybody in Nashville must be drinking 24-7. We’re a bunch of drunks down here. There’s too much, to be honest with you. We can’t keep talking about Fireball and Coors Light and having the tailgate down, etc.”

READ – From Checklist to Bro-Country: The Subversion of Country Music

Of course all of this is anecdotal. There’s no direct data corroborating that five-year-old’s are hitting the sauce too early because they listened to Little Big Town’s “Day Drinking.” But it does illustrate how when people show concern for the themes of country songs, even if they’re not inclined to listen themselves, they’re concerned that it could be having adverse effects on society as a whole. Like teachers in a madras, with a lack of variety, these popular country songs drive home the same themes over and over until it can be recited effortlessly by impressionable minds. It also make one wonder if the underlying reason is to make young consumers for country’s principal advertisers, like the Joe Camel effect of 2014.

Hartman’s report only deals with the drinking aspect of popular country songs, but really you could do a similar experiment dealing with sexual themes, possibly with very young female listeners. This all doesn’t mean these songs are patently evil. Music made for adults who (hypothetically) have the ability to rationalize what they’re listening to and not let it affect them adversely is fine. But just like drinking itself, the music should be consumed by an age-appropriate audience, and as with all things, in moderation. However mainstream country at the moment is on the drinking song binge of its life, even if the substance of the songs is slowly improving, and the question remains if it’s having an effect on the behavior of listeners, or if it will shape the behavior of listeners in the future.