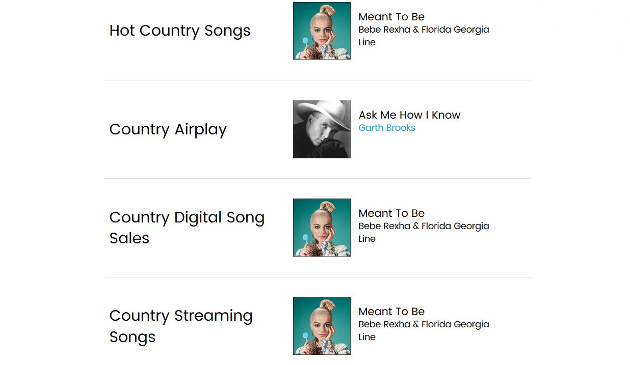 This week the country music world was shocked when a pop star named Bebe Rexha and her song “Meant To Be” featuring Florida Georgia Line debuted at the very top spot of Billboard’s Hot Country Songs chart. This feat was historic, and had only been accomplished two other times in the chart’s 70-year history, and only in specialty cases. The only other songs to debut at #1 were the All-Star, cross-generational “Forever Country” song released ahead of the 50th annual CMA Awards in 2016, and “My Baby’s Got a Smile on Her Face” by Craig Wayne Boyd released after his win on NBC’s The Voice.

The #1 distinction was dubious enough since Bebe Rexha is clearly not a country star. For reasons yet to be explained by Billboard, Rexha was allowed to appear on a country music chart, even when the result of this decision would be a historic outcome that was sure to cause reverberations throughout the country industry for years to come.

But looking deeper into the numbers, something didn’t seem to add up. Yes, Billboard’s chart rules change in 2012 to allow spins on pop radio to count on country charts was part of the cause for Rexha’s incredible debut, but she was still only sitting at #28 on the pop charts, and only at #48 Country Airplay charts. “Meant To Be” also stood only at #40 on Billboard’s all-genre Hot 100. So how did it end up at #1 in country, even with all of the pop data propping it up? The song is barely even a Top 40 hit in its home genre. Since the Hot Country Songs chart uses an amalgam of metrics to decide a song’s placement, there must have been an incredible amount of interest coming from other sources such as streaming and downloads to justify the #1 placement.

Instead of looking at the radio airplay charts of pop and country to find the traction for “Meant To Be,” the better place is in the digital realm. While “Meant To Be” sits at #40 on the all-genre Hot 100, it’s #8 on the all-genre Digital Songs Sales Chart. It’s also #1 on Billboard’s Country Digital Songs Sales chart. The song accomplished this by selling an impressive 25,000 downloads in one week. In other words, pop radio play and Billboard’s 2012 rule changes weren’t the biggest factor in Bebe Rexha debuting at #1. It was the downloads.

So where did all of these downloads come from, and why? It’s pretty simple. While most songs are priced at $1.29 via services such as iTunes and Amazon, Bebe Rexha’s “Meant To Be” is only priced at $0.69 at the moment—basically half price, which dramatically boosts the chances it will be downloaded, but still giving “Meant To Be” 100% credit in Billboard’s metrics right beside songs downloaded at full price. Though Billboard does have rules ensuring songs and albums priced at a severe discount don’t get an unfair advantage in the marketplace, the threshold for a song is $0.39.

This practice of giving a promotional price to a single is not unheard of. Other songs and albums have gained an advantage in the charts via price points as a promotional tool. But what makes the price point so critical in this instance is how downloads are weighed in Billboard’s tabulations when it comes to the Hot Country Songs chart, and how that didn’t seem to factor in the mind of Billboard’s chart managers when making the controversial decision to place Bebe Rexha and “Meant To Be” at #1.

Since downloading a song shows a much greater commitment from a consumer than streaming it, one download is equivalent to 150 streams. This turned Bebe Rexha’s 25,000 downloads into an equivalent of 3,750,000 streams in just one week for example, not to mention all the points it earned for its radio play on both pop and country, and the fact that the song also came in at #1 on the Country Streaming Songs chart via listens on Spotify, Apple Music, and other streaming platforms such as YouTube . . .

. . . which brings us to the second most important factor that led to Bebe Rexha finding her way to #1 on the Hot Country Songs chart.

As we all know, radio is slowly losing its iron grip on the attention span of mainstream consumers, and is being replaced by playlists on Spotify, YouTube, and other places. The streaming data these playlists generate is often used by artist representatives and labels to garner industry attention as a barometer of public interest. However just like in radio, how songs and artists get placed on certain playlists is not always transparent.

The video for Bebe Rexha’s “Meant To Be”—which at the time of posting sits at an incredible 77.5 million views in under 6 weeks—has benefited richly from prime placement on a number of YouTube playlists compiled by a company called Red Music, which appears to be out of Romania. This is not to be confused with Sony Red, which is a distribution company that is well-known in the music industry, and sometimes is referred to as Red Music.

However the company has no website that can be found, no social media presence, no public face whatsoever. All they have is an incredibly massive YouTube presence will over 1 billion total views on their various playlists. And Bebe Rexha’s “Meant To Be” is front and center on many of those playlists.

For example, on Red Music’s “Country Music Playlist 2018: Top Country Songs of 2018 (Today’s Country Hits)“, which has over 57 million plays, Bebe Rexha is at #6 on the playlist. On another Red Music playlist with almost 92 million total plays worded just slightly different, called “Country Music Playlist: Best Timeless Country Songs & Country Music 2018,” Bebe Rexha is at #7. In fact, the top of these two playlists are virtually the same.

Who else is at the very top of these playlists? It is primarily other country artists who have seemed to rocket up the charts recently with incredible streaming numbers like Luke Combs, Brett Young, and especially Kane Brown, who has multiple videos on each playlist. As Saving Country Music exposed in 2015, Brown’s whole “viral” explosion was partly manipulated by placing his songs on top playlists right beside established hits, and principally through relationship’s Brown’s manager had in the industry.

This Red Music has 13 major playlists on YouTube, covering pop, EDM, Christian, Reggae music, and others. Does Bebe Rexha appear on any of their other playlists? She does. On the “Best Music 2018: New Songs Playlist (Latest Top Hits)” playlist, with its 718 million views, (notice the strange, redundant wording of these playlists?), “Meant to Be” comes in at #18. On Red Music’s “Top 100 Songs of 2018: Best Music Hits This Week” with its 31.5 million views, Bebe Rexha is at #5. It’s also interesting to note that even though they’re not being promoted to pop, country artists Luke Combs and Brett Young also appear on this pop playlist at #36 and #40 respectively.

So if you want to know how Bebe Rexha’s “Meant To Be” racked up such incredible streaming numbers and shot up out of nowhere, this would definitely be a good answer. It’s also interesting to note that one of the first things in the description for the video of “Meant To Be” is a link to the discounted track on iTunes, likely facilitating more download sales via the YouTube playlist placement.

That doesn’t mean that these plays are fake, necessarily, though as Hyperbot recently exposed, anyone can purchase streams to gain attention. Sometimes the way those paid-for streams are fulfilled is placement on shady playlists. What these shadowy playlist generators will do is compile a playlist you would expect to see for pop country fans, and then place a song in the middle of it that automatically plays as listeners cycle through the bigger, more recognized hits, building up metadata for the artist, as well as name recognition and familiarity with the track.

What we do know about these Red Music playlists that Bebe Rexha and others have benefited from is they likely weren’t made by ham and eggs amateur fans looking to share their love for music. This is a for-profit business that has put these playlists together, and overshadowed everyday playlist builders since they have garnered so many plays, which allows them to generate even more interest by coming up first in search results when fans go to YouTube or Google (who owns YouTube) looking for a playlist of popular country songs.

At this point, how Bebe Rexha’s “Meant To Be” got here is inconsequential. By using a discounted price point, and benefiting inadvertently or purposely from the shadowy world of playlist making, she has been awarded everyone’s attention by coming in at #1 on what is supposed to be the very legitimate Billboard Hot Country Songs chart, as well as the Digital Song Sales and Country Streaming charts. Now country music’s radio programmers will feel the pressure to add the song to their playlist or be behind the popularity curve just like they did with Kane Brown, Bebe Rexha and Florida Georgia Line will benefit handsomely from the exposure, and whatever money was outlaid on the “promotion,” or lost on the discounted track, will easily pay itself back.

Unfortunately, all of this is not incredibly uncommon in the current music landscape. But seeing how “Meant To Be” was a discounted track from an established pop star, Billboard should have abstained from the risky decision of allowing it to debut #1 on the Hot Country Songs chart, ostensibly rewriting history, while it has excluded other artists from country recognition in the past such as the case with Green River Ordinance. Billboard is implementing new rules in 2018 to weigh unpaid listens like the ones on YouTube less than paid streams, but this is only part of the problem.

Bebe Rexha going #1 in country affects every country artist and their fans. This isn’t pop country vs. traditional country. This isn’t modern vs. classic. This isn’t about someone’s arbitrary definition of “country.” This is about all of the artists who’ve dedicated their lives to country in whatever form being unfairly hopscotched by an artist who didn’t.

Saving Country Music reached out to Red Music for comment on this story, but did not receive a reply. Thanks to commenter Chris for pointing out the Red Music/ Bebe Rexa connection.