Lower Broadway in Nashville has a new songstress haunting the streets, and she’s a good one. Sarah Gayle Meech, originally from the sticks of Washington State, showed up in town via LA and is doing what she can to make sure the once epicenter of the underground of country music doesn’t become just a row of corporate bars and crappy music.

If you want to know how to put out one badass independent/underground country album in Nashville, you could use One Good Thing as a template. First you line up the greatest renegade studio owner in town, one Andy Gibson, maybe more famous for being Hank Williams III’s steel and dobro player, but the man who tweaked the knobs on such legendary albums as Hank III’s Straight to Hell, .357 String Band‘s Fire & Hail, and every piece of recorded music Bob Wayne has ever released.

Then you line up the best superpickers in town, namely the superlative “Cousin” Kenny Vaughan (Marty Stuart, many others), and the legendary Chris Scruggs (BR549, many others). Just with these assets, if underground country were an arms race, Sarah Gayle Meech would have just announced herself a superpower.

But none of these dude’s names are on the cover, and none of them wrote these songs. Sarah and her songwriting are the center of attention here, and with impeccable country taste and instincts, Sarah assembles 12 original and authentic honky-tonk hard country songs for your listening enjoyment. 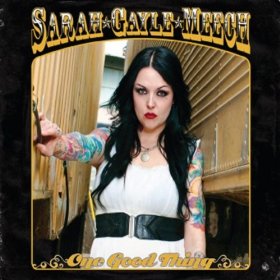 Don’t let the sleeves of tattoos scare you, this is country and country only. There’s no screams coming out of those red lips, or goat horns concealed under that raven black hair. Sarah Gayle Meech and One Good Thing are country through and through, piercing the breastplate of honky tonk with an adrenaline shot right to its heart.

Lying, cheating, heartache, and one night stands are the colors Sarah swirls together on her palette and then paints on to the canvas with a strong voice and a stellar band. I’ve seen Sarah live (at Muddy Roots) and can vouch One Good Thing isn’t just a product of studio magic, that live the material might even be more engaging, as in many instances honky-tonk-style country is. Sarah has set up residency at Lower Broadway’s famed Bluegrass Inn, and plays Robert’s Western World next door as well. She boasts a professional band and attitude, and her dedication, heart, and willingness to sacrifice to do it right is woven into the fabric of this album.

One Good Thing is a great debut album from Sarah, but what I want to see from here is how she develops and figures out a way to separate herself sonically from the overwhelming crowd of traditional bands and artists playing honky tonk music these days. She’s cut her teeth now, proven her country cred and how the modes and love of true country music coarse through her veins. But all the greats in the genre brought something unique to the table. They added something, or took something away, or reached deep down inside themselves to find a way to separate themselves from the herd.

I won’t say the material and music on One Good Thing is cliche, but the lyrics and licks are common enough that I’m afraid it will sound like “just another traditional country album” to some. This is a common issue for honky tonk artists, even for folks like Dale Watson.

Sarah Gayle Meech gives new blood to old music, and with a bold style and a professional attitude, she should be keeping Lower Broadway true to itself and hopefully expanding to parts beyond in the years to come.

Sarah at Robert’s on Lower Broadway