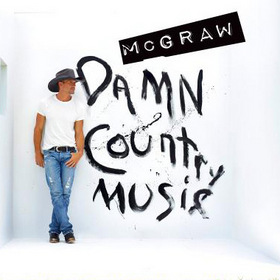 Though some may consider Tim McGraw soaring in such high thermals that it’s sacrilege for him to be singing about scraping the bottom and setting out to fulfill your dreams in country music, but that’s exactly what McGraw did on May 10th, 1989 when he boarded a Greyhound bus bound for Nashville—the day after his country music hero Keith Whitley died.

Tim McGraw was one of the lucky ones. Shortly after arriving in town he met a man named Mike Borchetta who was working for Curb Records. The result was Tim McGraw spending over two decades on the label, making millions of dollars and becoming one of country music’s most recognized stars. But near the end of McGraw’s tenure on Curb, the label refused to release his final records, ostensibly holding Tim hostage so he couldn’t leave the label. It sent McGraw’s once high-flying career reeling, and bogged the singer down in protracted legal battles.

Once finally given the okay to sign to another record label in 2012, Tim McGraw requested the signing happen in an unusual place for such an occasion: the Nashville Greyhound bus station. Meeting him there was the CEO of Big Machine Records, Scott Borchetta—the son of Mike Borchetta who had brokered Tim McGraw’s first deal 23 years before. The papers were signed on May 9th: the same date as Keith Whitley’s death in 1989.

“Damn Country Music” is a cognizant, reflective, honest, and appreciative ode to an art form that has helped put food on the table for many, and brought untold riches to others, including Tim McGraw, while also delivering bushel loads of broken hearts and shattered dreams over the years, and reshaping the lives of so many in disappointing and adverse ways.

Written by Josh Thompson, Jessi Alexander, and Cary Barlowe, “Damn Country Music” is a strong waltz slathered in steel guitar that delves into the intense feelings the term “country music” can evoke, and the role it plays in the performers who’ve chosen to bet their futures on it as a profession. There’s lines in the song about ripping up your roots, disappointing your mother, leaving your girlfriend, all for the pursuit of country—things it’s not far off to say Tim McGraw and songwriter Josh Thompson know about intimately.

“Damn Country Music” is well-written and brilliantly composed of reeling and emotional-laden musical movements that add to the melancholy, reflection, and depth the song looks to conjure. Productions decisions such as favoring the tom instead of the snare for the second drum hit in the chorus just ads to the aching nature of the words and the waltz beat. Unfortunately it still feels like a songwriting-by-committee effort because of the inclusion of mainstream country buzzwords such as “black top,” “whiskey,” and other oft-referenced country artifacts which hinder what otherwise is a respectable effort.

Beyond the country music forum, the song can also be about leaving your hometown to pursue your dreams, or feeling so passionate about something, you allow it to reshape your life like nothing else.

When we first saw news of McGraw’s new album coming in November, of which “Damn Country Music” is the title track, we wondered if the use of “damn” was for insult, irony, or emphasis. It turns out it’s the way to illustrate how the pursuit of country music can be a blessing and a curse. Country music takes sons and daughters away from their families. It makes superstars out of some, and misanthropes out of many. But it always has an impact on those who choose to pursue it. Though the discipline has become stained recently, “Damn Country Music” is pretty decent representation of what country music is supposed to be.

“Damn Country Music” can be purchased on Amazon.

Damn Country MusicHere’s the world premiere of my music video for “Damn Country Music.” You can get the song when you pre-order the new album on Apple Music here http://mcgr.aw/damncountrymusic