Why Miranda Lambert Is That 4th Mt. Rushmore Name We’ve Been Looking For 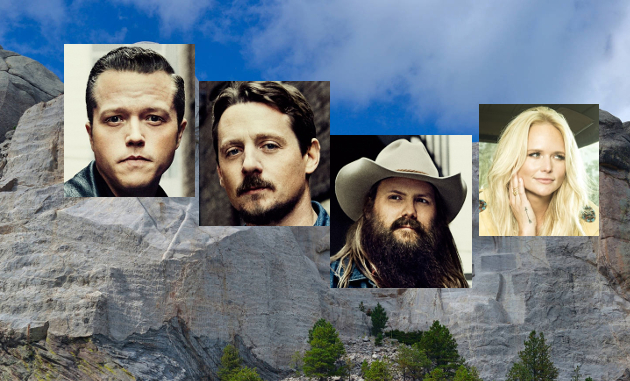 As much as you may be tired of reading about all the enterprises and success of country music’s most intrepid trio, much of the media is tired of writing about them. If anything, it’s the ubiquitousness of these men that have made them more polarizing, and worn the luster off a bit. But one after another, they continue to pile up accolades, win awards, break records and expectations for such independent-minded artists, and consistently continue to turn the country music world upside down without any indication that their musical insurrection will cease anytime soon.

Sturgill Simpson, Chris Stapleton, and Jason Isbell comprise the current Mt. Rushmore of independent country and roots music, and that is unquestionable, regardless of how you may feel about any one of them specifically, or even as a group. But what is the fourth mug we can put on top of that mountain? And wouldn’t it be great to have a woman up there to break up the monotony of a man fest?

The answer to this quandary is sitting right under our noses, and has been for years. It’s just the burden of our perspectives have not allowed us to frame it in the proper context. We traditionally think of Miranda Lambert as a mainstream pop country personality, right? We can’t consider her in the same company as a bunch of hardscrabble guys who came up through the independent ranks. But why not?

During Miranda Lambert’s Platinum era, it was hard to raise a pulse about her one way or another with independent-minded music fans. She was just the woman who won the CMA’s Female Vocalist of the Year annually and had some okay songs I guess, but was nothing really to write home about. Of course Miranda’s more dedicated fans have been along for the ride the entire time, but for many, there was a disconnect in the middle era of Miranda Lambert’s career where she went away for her harder, more rootsy material of her early records.

But with her last record The Weight of These Wings, Miranda made the move in a more decidedly Americana and traditional country direction, not just in style, but in overall approach and attitude, not worrying about how radio or Music Row would take it, but wanting to make the music she wants, and champion many of the songwriters and artists she listens to.

And that’s not all. There may not be a bigger champion out there in all of country music willing to share the spotlight with independent artists than Miranda Lambert, even more so that Stapleton, Isbell, and Sturgill. From her love of John Moreland, to her support of the women on the Hard Candy Christmas Tour, to taking artists like the Turnpike Troubadours, Brent Cobb, The Steel Woods, Sunny Sweeney, Lucie Silvas, and many others on tour with her; in fact it was just announced that Miranda will bring out the Turnpike Troubadours, The Steel Woods, Natalie Hemby, and Tenille Townes on her upcoming Bandwagon Tour with Little Big Town.

Chris Stapleton and Sturgill Simpson are on major labels. They just happened to have carved out scenarios for themselves where they’re still able to call all of their own shots, just like Miranda Lambert has done. One of the underlying goals when we first set out to save country music was this very scenario, where the mainstream ranks would be infiltrated by independently-minded artists. There may be no better example of this than Miranda Lambert, even if she was on a major label to begin with.

And just like Stapleton, Isbell, and Sturgill, despite her independent streak, despite her propensity to speak her mind and do her own thing, Miranda Lambert has been successful doing it, continuing to win and be nominated for awards, continuing to log strong sales, but continuing to struggle on purpose simply to do things her way, and the right way. Sure, in the case of Miranda Lambert, she’s coming back down to earth to achieve a more organic and authentic role in country as opposed to rising up from the grassroots of music like the others, but the important thing is that she’s here, doing the work.

So it may feel awkward for a bit. But when the names roll off the tongue about who is setting the pace for how to make country music the right way, and who your non country friends should check out when they want to know who would be a good introduction to the genre, don’t be afraid to include Miranda Lambert’s name, as well as the names of The Turnpike Troubadours, Sunny Sweeney, John Moreland, Brent Cobb, and the other artists Miranda Lambert has very directly championed in her career. Because she’s earned it. They all have earned it. In the future, other names such as Cody Jinks may occupy these Mt. Rushmore spots, but word of mouth, and creating opportunities for others is how this ship will get pointed in the right direction, and Miranda Lambert is steering it that way as much as anyone at the moment. This is the reason she deserves her visage on today’s version of the country music Mt. Rushmore as much as anyone.