Ariana Grande and Meghan Trainor to Play the CMA Awards 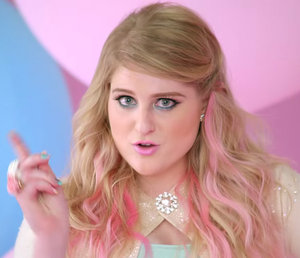 The Country Music Association Awards, or CMA’s are nigh upon us, and set to transpire on Wednesday, November 5th. And to get you all horny for the festivities, it’s been announced that ultra pop star Ariana Grande, and “All About That Bass” overnight sensation Meghan Trainor will be part of this year’s presentation. Miranda Lambert will be performing “All About That Bass” with Trainor, and Ariana will be performing with Little Big Town. Because you know, a country presentation devoid of high-caliber pop stars would be inherently boring and way too country to entice John Q Public to tune in apparently.

Pop stars and other non-country performers are nothing out-of-the-ordinary on the CMA stage, so let’s not make too much of this. Over the last few years, a non-country appearance by a big current star has almost become the norm. Remember when Kid Rock performed on the 2008 CMA Awards, and Lil’ Wayne showed up on stage, not really doing anything but soaking up face time on primetime television? This is all a symptom of country music’s lack of self-esteem and feeling like it needs to apologize for being country and prove it isn’t to win your interest. Instead the genre should be putting its best foot forward during its most prominent event of the year and making new fans by showcasing what it does best, and what makes it unique from the rest of music.

The problem with this particular selection of pop stars is that it speaks to a much deeper dilemma country music is facing, or more aptly, unwilling to face, and that’s why we’re taking critical awards show time from much more worthy country artists and relenting it to female pop stars outside the genre. It’s like when the country industry started nominating Kelly Clarkson for awards out of nowhere because they felt there were no other worthy names. Right now females are dominating the pop charts, holding the top five spots on Billboard’s Hot 100, including Meghan Trainor coming in at #1, Ariana Grande at #5, and lookey there, the artists formerly known as country, Taylor Swift, taking the salutatorian spot at #2.

Meanwhile, where are the women in the country charts? Carrie Underwood’s “Something In The Water” made a valiant showing, cresting at #2. But except for that, there’s not much to be found. Mark my words, the booking of Meghan Trainor and Ariana Grande is directly tied to the genre losing Taylor Swift this year, and needing a high-caliber pop-oriented female artist to compete for viewers. Really, if you’re going to go out and get a pop star, why not Taylor Swift? She’s got a brand new album coming out, and a history with the genre neither Meghan Trainor or Ariana Grande do. But Taylor is making a concerted effort to divest herself from the country mindset, and for reasons it’s hard to fault her for. This all says something very serious about the state of females in country music, and the country industry’s inability to develop female superstars.

No offense to Ariana Grande or Meghan Trainor whatsoever. In this day and age of country music, Ariana can blow pretty much every single one of country’s weak, Auto-Tuned voices right off the stage save for maybe Carrie Underwood, and it will be refreshing to see an astounding voice perform instead of just another Bro-Country act up there hobbling though a backwards baseball cap white boy rap performance. And Meghan Trainor, who is a Nashville resident, has done something the girls of country have been unable to do heretofore, which is challenge the image-driven, male-dominated landscape with a self-empowering message that captures the zeitgest, regardless of how annoyingly ubiquitous and automated that particular song might be.

But why not give those performance positions to some of country music’s amazing young female talent, or some of the more mature talent that is being shuffled to the side? Maddie & Tae’s “Girl In A Country Song” is no “All About That Bass,” (and their performance on Letterman was pretty terrible), but why not give them the opportunity? How about Lee Ann Womack who has a new album, or Ashley Monroe who has a song out with Blake Shelton? The only way country will ever become independent of the pop world for eyeballs is if it develops its own performers of interest.

The CMA’s job is to promote the Country music industry, and the bump Ariana Grande and Meghan Trainor will receive won’t do that; it will diminish the country focus in a time support for country music’s female artists is needed the most. The CMA stage could make a star on November 5th. But only if they’re given the opportunity.