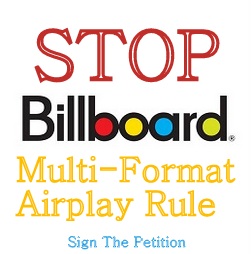 When Billboard announced new rules on how the songs on their “Hot 100” country chart would be tabulated, it caused a tizzy amongst folks who pay attention to these sorts of things. But the average Joe fans out there may have a little trouble understanding why the issue is something they should care about, and how it could negatively affect the music they enjoy. Make no mistake about it, I and many other folks who keep an eye on music charts as part of our jobs believe that these new rules could cause the largest wholesale power shift to superstars that music has ever seen, while sending the already existing trend of genres coagulating into on big mono-genre into hyperspeed.

There are many losers in the new Billboard format, and what I have been struggling with since they were announced is to name the winners. On the surface, they are the superstar names like Taylor Swift and Mumford & Sons, but at the same time the new rules take away the power of these artists to control the amount of attention their music receives over time. The new rules render the the music “single” virtually irrelevant since they include digital download data for songs that haven’t been released in single form.

Below are detailed explanations of how the new Billboard chart rules could affect you as a music fan.

As Fans of Major Country Music Stars with No Crossover Appeal

Not just small, up-and-coming artists will be affected by the new rules. Huge, major country music mega-franchises are feeling the effects already. Taylor Swift songs rocketed up the charts to #1, #2, and #10 when the rules were implemented, while Miranda Lambert’s latest single “Fastest Girl In Town” for example went for #9 to #16, Jason Aldean’s “Take A Little Ride” went from #1 to #5, and Toby Keith got knocked out of the Top 25 all together.

Meanwhile artists as far ranging as George Strait and Alan Jackson, to Justin Moore and Brantley Gilbert will have trouble getting their singles to attain chart success. Only artists with crossover appeal, or top tier superstar artists who can really drive digital sales will get any advantage from the new format, and will likely completely monopolize the chart with most or all of the songs off a new album once it is released, just like Mumford & Sons is doing in rock right now (see below), and Taylor Swift will do in a couple of weeks when she releases her new album Red.

It is a very real possibility that upon Red’s release, Taylor Swift will own every single top spot on Billboard’s country chart. Literally she could have #1 thru #16 sewed up because of the amount of downloads the songs and album will receive upon release.

Mainstream artists still in the developmental phase of their career can pretty much kiss goodbye any chance of having a breakout single rocket up the charts. The top of the charts will be so locked down with crossover artists, and the middle of the charts filled with names that used to be at the top, it will be nearly impossible to break through. The one exception seen on the charts so far is Florida Georgia Line’s song “Cruise”. Florida Georgia Line, like Taylor Swift, is signed to Big Machine Records, clearly one big winner under the new rules, at least on the surface.

As Fans Of Independent/ Underground Music

I bristle at the idea that none of this matters to folks who don’t listen to the radio or mainstream music, that this is a bunch of hubbub not worth caring about because their favorite bands don’t have a shot on the charts anyway. That’s like saying you don’t care that 20% of the country doesn’t have jobs because you do. If you are a fan of music, and music being better than worse, then these rules will effect you. Sure, not everybody needs to get exercised over the issue or get involved if that’s not their thing, but to get annoyed that other people are or to act like the issue is irrelevant is an exercise in musical elitism.

Everyone has a right to good music, and every artist with true artistic talent has a right to make a living off that music. Fair, equitable charts are one tool to help make that possible. Charts that pander to incumbent superstars and crossover material get in the way of talent development and discovery by both fans and industry.

And the truth is, Billboard’s charts do matter to many of independent/underground fans’ favorite artists. When Hank Williams III’s Damn Right, Rebel Proud debuted at #2 on Billboard, upstaging albums from Taylor Swift and Darius Rucker, this was a huge victory for underground country. Red Dirt albums from folks like Cody Canada and Jason Eady have recently received chart play, and the elevated name recognition from both fans and industry the accolade conveys. Maybe one of the best feel good stories in country music in 2012 is Will Hoge’s song “Even If It Breaks You Heart” that became a #1 hit for Eli Young Band. This song and many others written by honest, hard working, and relatively obscure songwriters will likely never get the recognition they did before under the new format.

The royalties a small-time songwriter can receive even off of one song can set them up for life. It can take a struggling artist from being poor and having to work part-time jobs, to being able to make moderate living off of music. It can also take a musician already making a moderate living off of music to the point where they can afford to raise a family, pay for health health insurance, own instead of rent their home, etc. And I don’t want to hear anyone say they want their favorite artists to stay poor so they continue to write good songs. Being poor should be a choice for an artist to make if they decide that is where they draw their inspiration from, not some benevolent state-of-being foisted upon them by the industry.

The fight might not be yours and that’s fine. But that doesn’t mean the fight is not worth waging to make the overall music world a better place.

As Fans of Rock, R&B/Hip-Hop, Latin, & Other Genres

That’s right, the counting of crossover radio plays isn’t just affecting country, but other genres as well. You thought Taylor Swift benefited from a chart boost under the new rules? Rihanna’s song “Diamonds” went from #66 on the R&B/Hip-Hop chart before the changes, all the way to #1. Why? Because it is being played on pop radio too.

As Fans of Taylor Swift

Oh, so you think that Taylor Swift is the big winner under this new system? In some respects she is, but in others this brings the country pop princess under renewed scrutiny.

First off, Taylor Swift doesn’t need the additional attention having multiple songs at the top of the country charts brings her. She’s already in the public eye, enjoying the utmost exposure any artist will ever get from media. Her new album Red will be the best-selling debut in 2012, trust me, and probably by 200,000-400,000 copies.

So what does Taylor Swift’s chart success bring her? Additional scrutiny. What are the two big knocks on Taylor Swift? That she can’t sing and she’s not country; the latter already at the top of public debate because she released a succinctly pop song and another “dub-step-inspired” tune off her new album. Taylor Swift doesn’t have to worry about creating exposure for herself, she has to worry about managing the exposure she’s already getting, lest that exposure turns into overexposure, backlash, and burnout of her brand. The new system doesn’t allow her to do that because it takes away the power of the radio single.

Numerous times in the past, Taylor Swift’s career has been diagnosed with overexposure. This happened with Taylor shortly after the 2010 Grammy Awards; the whole off-pitch singing situation with Stevie Nicks that led to her panning by critics across the country and her writing the song “Mean”. Afterwards, even the “Country Music Anti-Christ,” Taylor’s label owner Scott Borchetta admitted she was over-exposed, and was happy she was headed to Australia for a tour, and then on a hiatus from the public eye.

The Australian dates had been planned all along, but it actually worked out great…as far as the talking head of Taylor Swift, that one’s gone into hiding for a little bit, at least on this continent.

Another overexposure moment happened in September of 2009 when Kanye West accosted Swift at the MTV Awards. Just in August, Spencer Cain of StyleCaster asked if Taylor Swift has become overexposed from her previous episodes and her recent headlines for dating an 18-year-old Kennedy son.

When Taylor Swift’s new album Red is released and every single song charts under the new Billboard protocols, it could cause massive negative exposure to Taylor Swift’s career. Meanwhile the benefits Taylor Swift receives from her chart success are only parliamentary, etching her name as the best-selling songstress of this moment in time, but not effecting her sales, or her success overall.