Justin Moore’s “Outlaws Like Me” & Perversion of the Term

Trigger Down with Pop Country 135 Comments 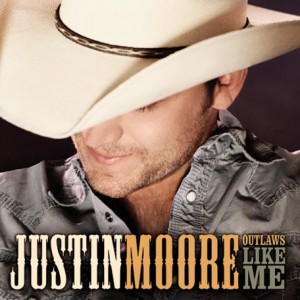 On June 21st, an artist I hadn’t even heard of until a few weeks ago named Justin Moore will release an album entitled Outlaws Like Me.

I have been critical of the “new Outlaw” crowd that includes Eric Church and Josh Thompson for perverting that sacred country music term, but to their credit, and the credit of their fans who have pointed it out, neither Eric nor Josh, or Jamey Johnson have ever come out and actually called themselves “Outlaws”. They’ve have talked about their “Outlaw” ways and thrown Waylon’s name out there beside their own like they belong together. But even when I saw Marty Stuart a few weeks ago, I took careful notice that though he said, “The most Outlaw thing you can do in Nashville these days is play country music,” he stopped short in using the term about himself.

Now here comes the fresh-faced Justin Moore, signed to Big Machine, the same label as Taylor Swift and Rascal Flatts, under the tutelage of the country music Antichrist Scott Borchetta, blatantly calling himself an “Outlaw”. Ironically, one of the reasons Big Machine has gone from a small-time player in the music world to a big dog is by giving their artists a little more creative freedom than most Music Row imprints. But an “Outlaw”? Fucking please.

I’ll be honest. From what I have heard from Justin Moore’s music, the guy can sing, and at first glance, I don’t find his music as offensive as some of the other “new Outlaws”. And I’m sure some of his fans will rush here to explain that when Justin says “Outlaw”, he doesn’t mean the country music kind, but I’m sorry, “Outlaw” means something very specific in country music, (<===and if you don’t know it, read that link) and you can’t play innocent about knowing exactly how people will take it when they see the title of this album. In some ways I feel bad for Justin Moore, just like I feel bad for Taylor Swift. Someone at Big Machine should have sat them down and said “Taylor, you’re not country, and Justin, you’re no Outlaw.” Instead they have to hear it from an asshole like me.

Most of these young artists don’t even know who Bobby Bare is, and what he fought for. They’re just a few years removed from mommy reading them Shel Silverstein’s Light in the Attic to scare the boogey man away, but have no idea Shel was an integral songwriter to the Outlaw movement. They don’t appreciate that 3/4’s of Waylon’s songs were love ballads, and that he hated the term “Outlaw” because it perpetuated a negative stereotype, the same exact negative stereotype that the “new Outlaws” are embracing with their misguided that being an Outlaw is about hard living.

And then yesterday it comes out that there’s a new band called The Moonshine Bandits, who are featuring Colt Ford in their debut song “For The Outlawz”. They are calling themselves “Outlaw country/rock/rap”. Now the perversions have perversions, as every fat white fuckwit who can’t sing feels entitled to his own niche and marketing angle. Eric Church meanwhile puts out a video that christens him the next in the line of Williams, Waylon, Willie, and Cash.

Legendary music writer Chet Flippo called Eric out, though he wasn’t brave enough to do it by name, saying, “As if he belongs in that pantheon of greats. Give us all a break. Well, these things always seem to sort themselves out in the end.” But of course, next week Chet will say people like me have no right to say who is country or not. And as for “these things sorting themselves out”, where is the dissension beyond Saving Country Music? As Chet alludes to, country music is supposed to be self-policing. Where are the real Outlaws stepping up to do battle with these carpetbaggers? In the early mid-2000’s, I heard songs like “Dick in Dixie” and “Put the ‘O’ Back in Country” and “Country My Ass”, and I believed them. Dale Watson said, “Get pissed and get mad.” Well, yeah Dale, I’m that already, but what am I supposed to do next? It almost feel now like those songs were simply a lyrical trend as opposed to a rallying cry.

Where is Jamey Johnson, if he truly wants to be “the next one”? Mums the word coming from his camp, because he’s too afraid of saying the wrong thing, and it resulting in the next payday being a little lighter. How about stepping up and fighting for what brought you those paydays in the first place?

When Justin Moore’s “Outlaws Like Me” comes out, I will listen to it with the most un-bias perspective I can muster, and try my best to judge the music beyond the marketing. But in the meantime, I am not going to look at him as the problem, I am going to look my self and ask, “What did I do wrong? How can I resolve this? What can I do to make sure this doesn’t happen in the future?” And anybody who truly cares about country music, and specifically Outlaw country music, must do the same. If the people with the big bullhorns aren’t going to take up the slack, then we, the country music fans and the small artists, must.

I might be making too much of this. I might be preaching at the choir. I might be fighting a losing battle, or tilting at windmills myself. But at this point, if we don’t fight for the preservation of the term “Outlaw”, apparently nobody else will.