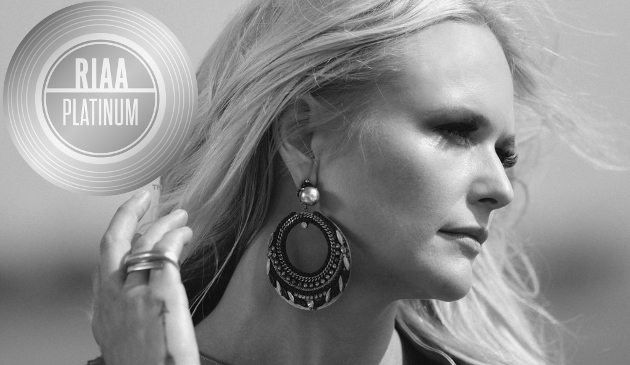 Miranda Lambert has just loaded up her trophy case with a bunch of new precious metal after the RIAA handed down multiple new platinum accolades for previous songs and records. After one of her two sold-out shows at the Country Music Hall of Fame has part of her 2018 Artist-In-Residence duties, representatives from Sony Nashville presented her with plaques for six new platinum accolades.

Her 3rd and fourth records Crazy Ex-Girlfriend and Revolution were both officially Certified 2X Platinum in the latest round of RIAA certs, as were the two songs “Over You” and “Automatic.” And two of Miranda Lambert’s most signature songs (and most country) “The House That Built Me” written by Tom Douglas and Allan Shamblin, and “Mama’s Broken Heart” by Brandy Clark, Kacey Musgraves, and Shane McAnally were both Certified 3X Platinum by the RIAA.

November will also see the release of the third album from Miranda’s supergroup The Pistol Annies with Ashley Monroe and Angaleena Presley called Interstate Gospel. The record is out November 2nd, which is less than two weeks before the CMA Awards, so don’t be surprised if the Annies grace the CMA stage.