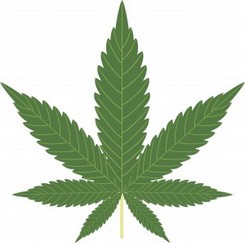 Yeah, I remember the first time I heard marijuana referenced in a song and thought it was cool. It was a song by the New Riders of the Purple Sage called “Henry” from their 1971 self-titled album. More of a smuggling song than a drug song, the story and the suspense of the song is what made it intriguing, with the marijuana more of just a backdrop. This inspired me to try and discover similar songs which led me to the Arlo Guthrie smuggler’s song “Coming Into Los Angeles.”

Gram Parsons somewhat challenged the stuffiness of the country establishment when he sported a Nudie suit with marijuana leaves embroidered on it in the late 60’s, but at the time he was considered more of a product of the rock world. And then of course there’s Kris Kristofferson’s iconic “Sunday Morning Coming Down” whose somewhat veiled reference to marijuana is given credit for stretching lyrical boundaries in country music on its way to being named Song of the Year by the CMA in 1970.

But 2013 very well may go down as the year when referencing marijuana and other drugs in your songs is no longer cool as much as it is conformist—a lyrical hook, a well-recognized buzz word made for marketing an artist or song just as much as anything else. When a former Disney star like Miley Cyrus is out there talking about “Dancing with ‘Molly'” and “Trying to get a line in the bathroom,” and the 80-year-old Willie Nelson is singing a duet with the 42-year-old Snoop Dogg called “Roll Me Up And Smoke Me When I Die,” there ceases to be either the generational gap, or the exclusivity of drug references in music to make them “cool.”

Where the current trend of mentioning cannabis in your country song seems to be cropping up is in the unlikely place of country music’s songwriting females. This dynamic and inspiring group of women who are regularly referenced as the last bastion of substance in country music’s mainstream seems to be the epicenter of country music’s marijuana bloom: Kacey Musgraves with the songs “Merry Go ‘Round,” “Blowin’ Smoke,” and “Follow Your Arrow.” Ashley Monroe with the song “Weed Instead of Roses.” Brandy Clark and the song “Get High.” And The Pistol Annies with songs like “Takin’ Pills” and “Hush Hush.”

The differences between these song’s marijuana and drug references and the trends on the male side of country music to reference pickups, tailgates, ice cold beer, and dirt roads, are very subtle. Sure, many of the pot references come within the context of a more in-depth story. But just like pickup truck references, they’re used to grab the attention of demographics and sell music to listeners.

Just look at the graphics below taken from Amazon’s MP3 popularity ratings. For a marijuana song like Ashley Monroe’s “Weed Instead of Roses,” it positively dominates the popularity contest compared to her other songs. Same goes with Kacey Musgraves’ three most popular songs (though in fairness, “Blowin’ Smoke doesn’t reference pot directly). One might argue though that these songs are more popular because they are also the artist’s radio singles. But this speaks even deeper to the current marijuana trend. If you want to be a mainstream female songwriter and have the A&R folks pay attention to your music, you may want to include a song with marijuana references.

Ashley Monroe’s Tracks from the album Like A Rose: 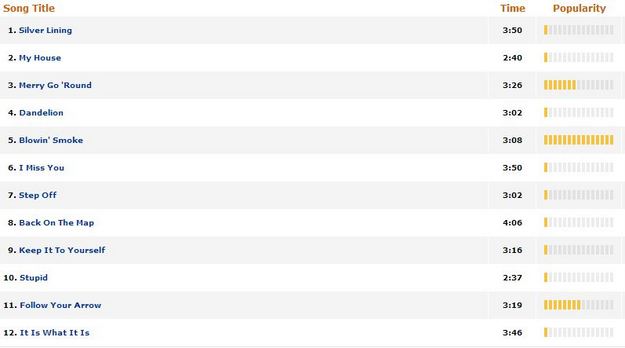 Just like with the country rap trend or the pickup truck trend, when a lyrical theme works, it almost becomes a requirement for mainstream artists. And just like the male tailgate songs that sound so cliche to distinguishing music listeners, marijuana references appeal to bored suburban types who listen to country music as a form of escapism.

Back in the 90’s marijuana references and imagery became popularized by big music acts like Cypress Hill, Pantera, Snoop Dogg, and Green Day. But then the trend became sort of passÃ© amongst bands on the fringes of the mainstream when marijuana references began to work themselves into the content of Top 40 pop songs. It was no longer cool.

Country music was a late bloomer to the marijuana marketing trend because it’s traditionally conservative-leaning audience. Artists like Hank Williams Jr. and Charlie Daniels referenced pot in the 70’s and 80’s, but this was far from the mainstream. Waylon Jennings’ “Don’t You Think This Outlaw Bit’s Done Got Out of Hand,” Hank Jr’s, “O.D’d in Denver,” take it a step further into the cocaine realm. But as modern mainstream country artists step into the marijuana and drug realm, independent and cutting-edge artists seem to step away. For example Hank Williams III started his career in country music with heavy marijuana imagery and references, but has veered away from it in recent years.

Women are not the only ones referencing marijuana in the current mainstream country market. Eric Church sells T-shirts with pot leaves on them and had a hit song in “Smoke A Little Smoke.” Luke Bryan’s mega-hit “That’s My Kind Of Night” says “I got that real good feel good stuff up under the seat of my big black jacked up truck.”

The political environment surrounding marijuana also plays into the pot music debate. The stigma around the drug has been significantly diluted by the passing of laws decriminalizing the plant, making it legal for medicinal purposes, or legalizing it in full which has happened in some states. Marijuana is a very commonly-used substance throughout American society, and as the stigma around the plant subsides, so does the potency of the references to it in popular culture.

There’s nothing naughty or cutting edge about a pot reference in a song anymore. It’s conformist. It’s marketing. It’s mainstream. Not all the time of course; sometimes it comes up naturally in the context of a song. But just like many so many other musical elements, marijuana and drug references have been co-oped by the mainstream, spoiled, and exploited.