Nashville’s Music Row truly has no shame. It started in the modern era with these ridiculous “America Fuck Yeah!” anthems after 9/11 and the wild commercial success of Toby Keith. All of a sudden you couldn’t make an album on Music Row without including one. At their heart these songs weren’t heartfelt memoriums, they were strictly marketing ploys to pro-military sentiment pure and simple.

Now with the wars winding down and that style of song running its course, we needed a new enemy. So hell, why not Cancer? That’s a great sentiment to exploit, and Martina McBride rode it to grand commercial success with her song, “I’m Gonna Love You Through It”, and Tim McGraw with “Live Like You Were Dying”.

And now some bored suits on music Row were sifting through demographic data and had an epiphany. “Hell, all these dumb rednecks who buy these stupid songs love Jesus, so why don’t we start releasing songs about that?” Is it any surprise that when you look who released Thomas Rhett’s “Beer With Jesus” it traces back once again to Scott Borchetta’s Big Machine Records? 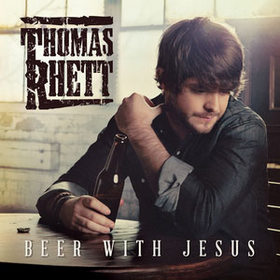 Jesus may have turned the other cheek, but he also overturned the tables of the money changers in the temple where they didn’t belong. Just like the Romans of biblical times, these pop country fart tards are foreign occupiers who need to get the hell out of country. I don’t pretend to know what Jesus would do, but if I were him, I’d shove my sandal straight up Thomas Rhett’s ass and tell him he could keep his Michelob Ultra. Somewhere in the Bible it must say that the worst lies are the ones you tell yourself, and if Thomas Rhett thinks this song is anything other than marketing, he’s committing a cardinal sin.

Besides, wasn’t Jesus more of a wine guy?

A little bit of me appreciates the sentiment and the creativity behind the idea of this song. The problem is it talks so far down to its audience, and Thomas Rhett’s “aw shucks” approach is such an overt acting job that you feel embarrassed for him. It’s too obvious what’s going on here. You’re supposed to go, “Well shit, I like Jesus, so I guess I like this song and find it touching. It’s religious, but cool too.”

And why is it that every time religion is peddled through popular culture it has to be some awful version of ultra cool, like Brantley Gilbert and his douchey attitude and motorcycle fashion, or that kid from American Idol, what’s his name, Dylan something and his ultra kinked-out, hyper-bleached mohawk? Religion is supposed to be boring because it is supposed to ground us.

Make no mistake folks, this is what passes for a “deep” song in the vapid, corporate country world. So thank God if you can see right through this and that you have real music filled with true heart and expression to listen to instead.