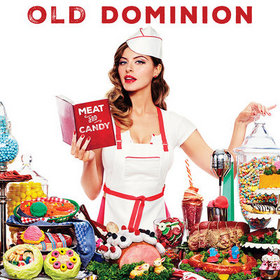 Citizens of the world and distinguished country music fans: do everyone alive today and all future generations a generous deed, and if you find a copy of this album in anyone’s home, vehicle, place of work, or digital music library, for the love of all peace-loving humanity, don’t fuck them.

Country music already had an ultra-urban, metrosexed anti-country solo superstar in Sam Hunt, and a pair of nimrod wannabe cracker rappers crotch stuffing the duo space in Florida Georgia Line. So hell, why not launch a group with the same calculating and vacuous nature to stupefy idiots even further into thinking any of this nonsense has anything to do with country music?

And boom, here comes Old Dominion, made up of two professional songwriters in Trevor Rosen and Matthew Ramsey who’ve previously written bullshit songs for Sam Hunt and Luke Bryan, a few spare part musicians thrown in there so they can qualify for “group” distinction come awards show time, and hook them up with who else but puppetmaster extraordinaire Shane McAnally, who once was lauded for his songwriting work with Kacey Musgraves and Brandy Clark, but in the last couple of years has become the singlemost driver of the urban shitrification of country music in its 75-year existence.

First Sam Hunt, and now this. Shane McAnally is quickly becoming our generation’s Billy Sherrill, if Billy Sherrill was like a goddamn mechanized force of EDM/R&B/hip-hop crop dusting saturation that shoots carcinogenic root-deteriorating agents indiscriminately over the country masses until there isn’t a single green blade of interest in true country music left over the entirety of the dead, cracked earth.

There’s a song on this album about some drunk dickhead who calls up a girl he wants to screw to convince her to break up with her boyfriend. There’s a tune that makes use of the idiotic comeback “said nobody,” building it into the entire premise of the song. There’s a song that compares love to an empty beer can rattling around in the back of a pickup truck. No, I’m not kidding, and these are not over-dramatizations. We thought the whole “truck” and “beer” thread had been completely played out in 2013. I guess that’s one spec of creativity you can assign to this disaster—they figured how to pull yet another turd out of that cesspool of clichÃ© stereotypes.

“Song For Another Time” quotes song titles from Hank Williams, Willie Nelson, and Kris Kristofferson, but this only works to piss off the aware listener even more that these country music cretins would incorporate the work of heroes into their shitty song that also makes reference to Lionel Richie. It’s like these douche rockets are actively working to rub dog shit in the faces of actual country music fans.

Old Dominion is the music people with $700 cars with $7,000 rims paid for with a payday loan listen to while they work at the prepaid phone kiosk in a pawn shop. I’ll give them this: Meat & Candy is about the perfect title for this audio abomination since it offers nothing more than an artery-clogging sugar rush with no nutritional value for the listener whatsoever. This is music for people whose lives revolve around bacon jokes, but even NPR gave it a positive review. Why? Because since Shane McAnally is part of it, folks feel like it should be praised as part of a “progressive” agenda.

What an absolute embarrassment this thing is for anyone and everyone involved. And let me tell you one thing: Shane McAnally needs to stop and appreciate that he represents something in country music, and with artists like Sam Hunt, and now Old Dominion, he’s not representing anyone positively at all. At least Sam Hunt presents himself as some softy loser with little game club hopping for love. Old Dominion is all about misogynistic machismo and denigrating women to objects that offer no value to life aside from satiating voracious patriarchal appetites.